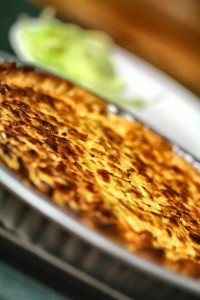 Better than a million Lance Armstrongs

You know those people who say they read Playboy for the articles?  Well, I watch the Tour de France for the recipes.  Really and no kidding.  And I can prove it.

One of these is a good old-fashioned bacon and leek pie (or tart, as Gabriel calls it).  In French,  as Flamiche aux Poireaux, it achieves a level of sophistication that bacon and leeks can only fantasize about in their English incarnations.

But in either language, it’s tarty brilliance is tasty, satisfying, and can be consumed hot or cold, with salad or without, on a plate or in your hand as your rush off to pilates, guilt-stricken over what you’ve just fed yourself.

So let’s forget about blood dope, Lance Armstrong, and blood cholesterol, too, for that matter.  In ttf-ville, where we achieve kensho (temporary enlightenment) one blink at a time, EPO means Egg Pie Orgasm.

Here’s the recipe now, just in time for breakfast, lunch or dinner.  And here’s a link to the SBS page on which you can enjoy Gabriel’s segment all over again.  Thanks Gabriel.

Ingredients and Method as we go – adapted from Gabriel’s presentation

First, preheat your oven.  Gabriel says 220C, but I’ve found that my oven is fine at 200C and it’s fan-forced – best to go with your instincts about your own little cooker.

1 sheet of savoury pastry (I use pre-fab shortcrust – remove from freezer about a quarter of an hour before you need it, and cover with a tea towel to prevent drying out while it thaws.  Then, when you get the chance, press it into a greased flan pan – one of those jobbies with a removable base and poke it silly with a fork – to prevent rising damp when it’s cooking).

4 middle rashers of bacon, diced, fried, cooled on a plate (speed up the cooling by refrigerating for 20 minutes or so).

2 leeks, halved down the middle, finely sliced, fried, cooled on a plate (refrigerate with the bacon) (don’t use the darker green part of the leek, it’s tough – just get over the fact that you’ll have to discard half the bloody thing after it’s taken up all that space in your fridge – if you have chooks, chop it up and share with them, but be ready for atomic flatulence and probably hideously malformed and curdled eggs)

In a bowl, whisk 2 eggs (not the leeky ones!), 80 mls of cream (some cooks substitute ricotta to be healthier, but if you’re going down, you’re going down, so don’t sweat it and get used to fewer working arteries for god’s sake), and 40 mls of milk (full cream, of course), salt and pepper if you wish (and I add a handful of finely diced garlic chives – for colour and a bit more flavour, like you need it – I have several pots of garlic chives in the garden so I have to use them or they stare at me eyelessly and affect an abandoned air).

Then, set this bowl of high fat goodness aside until we’re ready for it shortly.

Now, grab your prepared pastry flan and spread the bacon over the base.

Then, spread the leeks on top of the bacon.

Finally, spoon the egg mixture gently over the bacon and leeks.  Pat it out to the edges so you get good coverage, just like your broadband connection, when it works.

I cook my tart for around 20 minutes and it’s perfectly done, but Gabriel recommends 35 minutes.  Again, work out your own ovenly quirks and use these times as a guide.  But I highly recommend checking after 20 minutes so you don’t burn its bum or any other important bits.

Absolutely finally, enjoy – and you can try to resist the temptation to eat more than one slice, but  you’ll fail, so just go with the flow.

Tip: Why not make two if you happen to have two flan pans.  This dish is a seriously good one, and you (and your loved ones if you can bring yourself to share) deserve more of it whenever possible.

As the totally irresistible Julia Child used to say, and how appropriate it is for today’s treat: Bon appetit! (Watch the movie, Julie and Julia – excellent, and even better the second time around, especially while eating Flamiche, and Stanley Tucci is adorable, as always – I’m saying nothing about Meryl Streep – she is beyond saying).

Have you had an interesting culinary experience recently, grasshopper?  Let us all know here at ttf.