So, I arrived early with the internet desperadoes after dropping off my partner at drumming class 5 minutes down the road. ‘It’ll be a little experiment,’ I said, as we parted. ‘I’ll see how it is in the great world with Elmo (my cute and new baby laptop – so tickle me, I like giving them names) for company. If I get bored, I’ll go for a gander at the gallery.’ 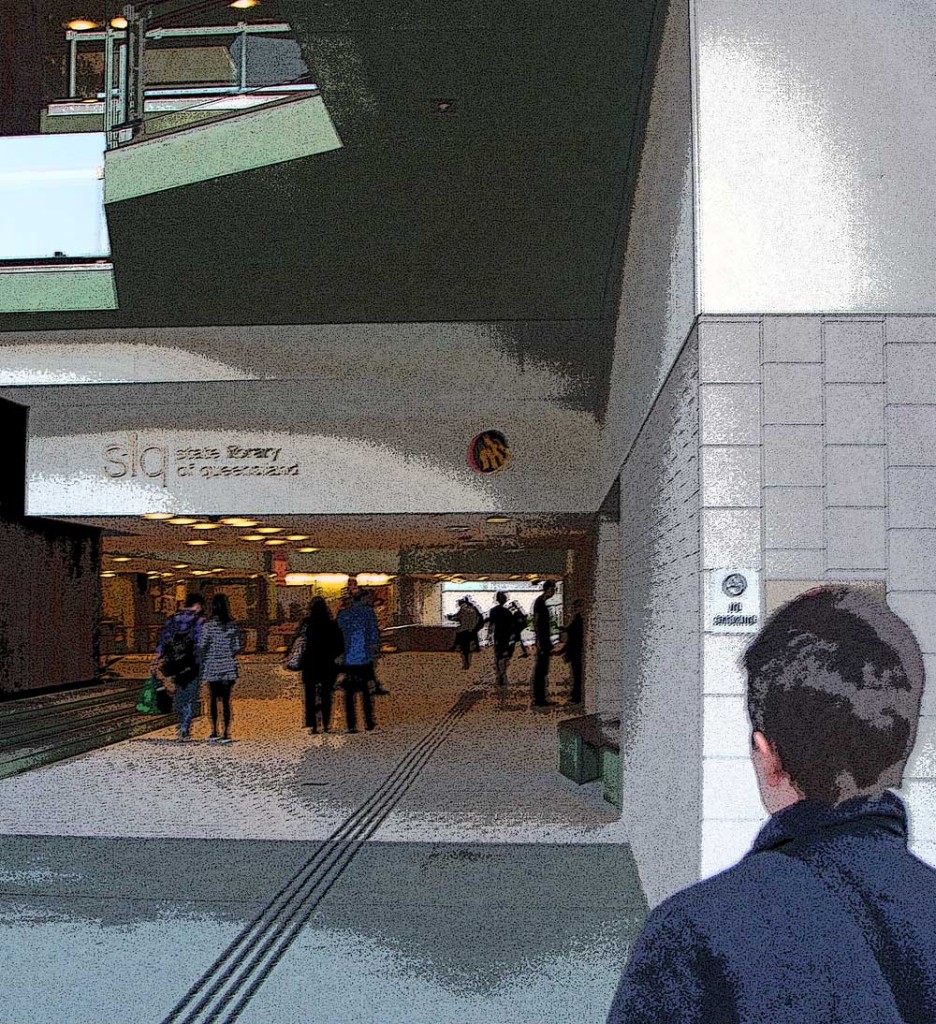 We waited a few minutes past the hour, the desperadoes and I, but once those sliding doors opened, the gang of six charged in to acquire their monitors and desk spaces. New to the place, I strolled around assessing the best spots before planting myself at a ‘study space’ and plugging in.

Within 15 minutes, the ‘study space’ hub morphed into the compleat hubbub.

Of course, I’d chosen the wrong floor and the wrong ‘study space,’ although you’d think that the signs designating an area ‘Study Spaces’ in a large red font, would be relatively quiet.

Don’t be fooled. It isn’t. It’s a library, clearly – it says so on the sign outside – but it isn’t quiet.

I should have read further to where the sign said, in smaller print, ‘Quiet study spaces and meeting rooms are available on levels 2 and 3.’

Except that, to get to the magical, and now legendary (in my mind) ‘quiet spaces,’ you have to surrender most of your worldly goods: your shoes, socks, belts, ties, umbrellas, contact lenses, phones, bar fridges, wallets, library burglarising equipment, watches, braces, and first-born. All right, you can keep the braces and the lockpicks, but you get the drift.

Actually, you can take your computer to magical Levels 2 and 3, but not the Conservation Foundation bag it’s in with its leads and USBs and other essential crap like notebooks and pens and index cards. And to be fair, you can take everything out of your small backpack and forge a path to the ‘quiet study spaces’ if you possess the many arms of Vishnu, hopefully with attached and versatile hands. And a-juggling we will go.

On my right flank were toddlers in a play area full of upright wooden blocks of varying heights. From my angle, the area looked like a miniature city of skyscrapers painted lime green, pink, blue, yellow and, for the enviro-heads, natural pine.

One skyscraper toddler began to scream. Perhaps she’d been hit with a jaywalking ticket, or discovered she couldn’t lease the pink high-rise in the far corner, after all. The parents over there were less voluble and appeared more intent on quietening things down. They should have known that isn’t possible in the big city.

‘Rosie, that’s not our pram, darling,’ a mother told her Rosie, who’d begun to push a foreign pram down 5th Avenue. There followed the crashing of blocks by Rory, Rosie’s sibling. ‘Rory, let’s go and find some arts and crafts to do.’

Rosie and Rory’s mother walked by behind me towards the arts and crafts area on my left flank where the babies hung out. I thought I should probably cover Elmo’s screen so she couldn’t tell that I was writing about her, poor thing. But I needn’t have worried – she was far too consumed with settling her two Rs to be bothered with a stranger’s computer screen

It’s a well used place, this ‘study space,’ but it isn’t a library. Or is it?

This is what it appears to be: a free internet zone, with attached child-distraction facilities. It isn’t so bad once you get used to the competing noises. In fact, it’s rather like a shopping centre without the supermarket and cafes (although there is a café outside, no more than thirty metres away – why don’t they go there, and eat bagels and drink hot mead?).

Everyone confines themselves to surfing or child-minding in here. The surfers in their own worlds stare at their own screens or the library’s freebies. The parents talk to each other as their babies and toddlers do their thing.

It’s a party place, this study space, a permanent part of the new library paradigm.

Can I remember why I didn’t take the drumming course, too – it couldn’t possibly have been the noise factor.